Looking for a great book to share with your young readers as we prepare to observe Veteran's Day on November 11th?

Reviewed here on December 1, 2012, The Poppy Lady is still as timely and fresh as it was then. A new group of  children are now reading and comprehending what it means to be connected to ancestors who served our country before they were born.

Here is the link to my review. Go to a library or independent book store and hold the book in your hands. The Poppy Lady will bring generations together.
Posted by Joan at Thursday, October 29, 2015 2 comments:

During the Civil Rights movement in the turbulent 1960’s, black and white citizens in Huntsville, Alabama worked together to make their city an example of peaceful change. This was little known at the time and the same is true today.


SEEDS OF FREEDOM, The Peaceful Integration of Huntsville, Alabama by Hester Bass, illustrated by E. B. Lewis, Candlewick Press, 2015 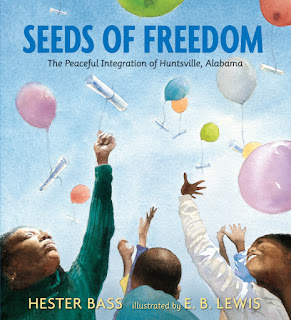 Author Hester Bass was a first grader in an all-white classroom in GA in 1962. She saw black children in her town and wondered where they went to school. They weren’t in her classes. Where were they?


Later, when she lived in Huntsville, Alabama, she discovered a fascinating story.  She asked lots of questions (writers do that) and decided that what happened in Huntsville, the how and the why, should be written, published, and added to the growing collection of diverse books for children.


Both author and illustrator are highly awarded. Hester Bass’s first picture book for young children, The Secret World of Walter Anderson, also illustrated by E.B. Lewis, won the Orbis Pictus Award for Outstanding Nonfiction for Children. More honors for E. B. Lewis include the Coretta Scott King Illustrator Award for Talkin’ About Bessie: the Story of Aviator Elizabeth Coleman by Nikki Grimes. This talented team of author and illustrator mirrors the contrasts and the strengths among the citizens of Huntsville.


Invisible lines in communities, schools, stores, parks, swimming pools, public restrooms and drinking fountains, wherever both races might come in contact, existed in Huntsville much the same as they did in other southern cities. However, the difference in Huntsville is revealed as author and illustrator lead the reader through a series of choices made by black and white citizens to face injustice with peaceful protest. The courage of both races sets an example for others who seek out of the box solutions to complex problems. It is possible to work together.


In August 1963, a judge ruled that four black students should be admitted to Huntsville schools. However, in September, those four students found the doors of their prospective schools locked.  Governor George Wallace had closed public schools to thwart their efforts. At the same time, a private school across town, a black school, was adding twelve new students--all white-- to its roster, quietly and peacefully. Following this, after the public schools re-opened, one black child was successfully enrolled in the same white school closed to him only a few days earlier.
I didn't know this story before. Did you?


The author’s note brings a greater historical perspective and concludes with a challenge to all of us: “More needs to be done. Be the one person who makes a difference.”

Joan
I write, therefore I read. This blog is based on my booklog. Parents want children to read books that inspire and encourage, educate and entertain. Children's writers want to write those books. To do that, we read the best books published. I read review journals, books recommended by editors, other authors, librarians and teachers, and best of all, children. What are your favorite books written for young readers? If you want to know more about me, see my profile for my website and credits. Let's talk books!